Since 1996 juwi has been developing and delivering projects in the area of energy supply from renewable energy sources. The company operates in the solar, wind, bio-energy, hydropower and geothermal energy sectors, as well as in the areas of green building and solar electro-mobility. What was originally a two-man operation has grown into a multi-award winning company with 1,750 employees in 15 countries. In addition to environmental prizes and repeated recognition as a “Great Place to Work”, in 2011 juwi received the Axia Award Rhine-Main from the auditing and consulting company Deloitte for its “commendable strategic orientation [that is] successfully realized by comprehensive controlling through to supportive personnel management.” (Quote from Peter Steiner, jury member).

The field of renewable energy is strongly influenced by political decisions. Each country in the world places a different level of emphasis on this topic, which is reflected in very different legislation. By operating in several sectors, juwi is on the one hand very dependent on political developments, but at the same time can also balance out the performance of the individual sectors. The challenge is having a clear and up-to-date view of the operating results at all times, thus being able to identify, analyze and counter any deviations as soon as possible. In 2008 juwi commenced the search for a professional planning and controlling tool in order to systematically map this overview and establish it globally. The Excel sheets that had been used to date had become too unclear and were insufficient to sensibly manage strategic growth. The tool needed to be able to be managed even by persons without any IT knowledge, and to write projected figures directly back into the source system. juwi compared several tools and decided on the Board toolkit which requires no programming: not only did it best fulfill all of the requirements, the fact that administration of user privileges can be controlled from any department was viewed as an additional advantage.

Since the initial project, consisting of a group-wide consolidation of the Excel-based P/L statement that was implemented in just a few weeks, the area of application of the business intelligence tool has grown enormously. Today, 220 users worldwide including managing directors, boards of management, human resources directors and senior managers in juwi's 88 companies are working with it actively. For juwi, Board has become the central planning and information tool. Time-saving, clear and effective, it assists in providing administrative support for the huge growth in personnel and in recognizing new developments in policies and markets in order to rapidly undertake any necessary countermeasures.

Thanks to Board's user-friendly operation, juwi's controlling department can independently develop the areas of application. The following applications have been implemented to date:

Time-consuming Excel BP files and intensive planning sessions are a thing of the past at juwi. All of the worldwide planning processes have been transferred to Board. In order to plan the rolling forecast and the next year and longer-term extrapolations, the planner uploads the values from the previous year, adjusts them as a percentage or absolute figure, and writes the modified data back into the source system. If he/she so desires, comments can be placed next to the changes. Each company carries out planning using its own country's currency (at least 14 different ones), and Board performs the conversion into Euro. juwi can react quickly to changes in political provisions, such as the planned cut in German subsidies in the solar industry in 2012, thanks to the company-wide plan overview, and can allow relevant measures to be incorporated into the rolling planning.

In the area of project management, juwi's core business, project managers update the cashflow for each project and each month by adjusting advance payments, earnings and expenses, which cause a range of items to be recalculated, from payment dates to the liquidity forecast. Data from the source system LiquiBase (based on SQL Server), planned values from Q4 of the previous year and actuals can be drawn upon and used for the purpose of the company's own re-checking. The linking of project planning and rolling corporate planning within a single solution makes Board the tool in which the impacts of project adjustments on the company's overall situation can be understood in detail to the day. Project planners also have the ability to create new projects which have not yet been recorded in the source system. With the aid of “Advanced Transaction Objects”, simply select the cost unit's number, project type, status and end date. The project is automatically integrated into all of the planning; it is intelligently populated with values of the same kind and can be processed for all other ongoing projects.

The position approval process at juwi is also standardized and clearly structured using Board. An overview screen provides information on all of the planned new positions in the approval process and shows which entity (senior manager, managing director, controlling department or board of management) has approved a position. Underneath this, a budget overview compares the forecast budget per cost center and the extrapolation of positions that have already been approved (including existing employees). To apply for planned new positions, the cost center chief enters the salary and start date and has the option of completing a job description or reason for the need for the position in the form of an Excel or Word file. Saving this file starts the approval process. The planned new position automatically appears in the “job approval” view for the next higher authority, where at the push of a button it is confirmed or rejected. After the controlling department has checked that the planned new position lies within the budget, as a final step it is then approved by the board of management, saved and written back into the personnel source system (SAGE). During the overnight data update process the allotted budget is integrated into all of the linked extrapolations. Thanks to this central application, the HR department always has a complete overview of all of the planned positions without the need for hardcopy forms. In a rapidly growing and environmentally oriented company such as juwi this is of primary importance, however above all it is significantly more efficient and saves more time than carrying out planning using Excel files.

Furthermore, juwi uses the finance, project and personnel information that is available in Board from the source systems MS Dynamics AX, SAGE and SQL LiquiBase for comprehensive reporting that is prepared in a user-friendly manner. In the “Master Forecast” view, the executive and board of management obtain an overview of all of the crucial information that was previously available only to controllers. On demand you can select data according to such criteria as currency, sector (wind, solar, bio or holding), country or company and thus refine even more precisely the already high level of informative value of the data.

For other user groups, juwi's reporting portal is in the form of individual dashboards. These dashboards adapt to the rights of the user and provide detailed information about the P/L statement, balance sheet and cashflow figures for the current month or in the monthly overview. Multi-dimensional ad-hoc analyses right down to document level ensure the best possible degree of transparency and can, if necessary, quickly show the reasons for any outlying values. The personnel dashboard offers an overtime analysis in which colored traffic lights show how many employees have accumulated a certain percentage of overtime hours and whether this means that they have been receiving sufficient relaxation time.

The secret to the success of the continually expanding project is juwi's committed controlling department employees who, because the toolkit does not require programming, can implement sophisticated applications themselves and can provide excellent training for other users in all of juwi's companies. 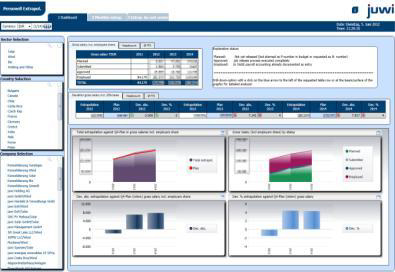 By consolidating the data from very diverse departments, juwi has made the step towards a cross-divisional, integrated application for analysis, reporting and planning. In the areas of finance, projects, and personnel, all of the information is tailored to user groups and available for detailed controlling or user-friendly and efficient planning.

In the field of corporate planning within Board, juwi has a comprehensive overview of all of its companies and sectors and quickly recognizes any plan variance for individual companies. This allows juwi to balance any foreseeable plan variance in a sector as early as possible through suitable countermeasures and by compensating with more strongly performing sectors. In this way juwi can weather even staff shortages and political uncertainties, such as 2012, without having to worry about the feasibility of the company.
All of the applications are interwoven and facilitate the work, as the adapted data automatically flows on to all of the associated extrapolations and reports. At the same time, Board's ability to write data back into the source systems guarantees a database that is always up-to-date.

Company management enjoys a transparent overview of the overall development of its companies, while the controlling department appreciates the ability to autonomously realize or further develop applications. In doing so it uses Board's flexibility not only to implement global corporate planning in various currencies in a clearly structured manner, but also to establish the position approval process as an international standard in the form of a paperless workflow.

“The overview guaranteed by Board for all of the positions that are applied for, that are awaiting approval and approved is worth its weight in gold! Not only has it improved how we structure the position approval process – our requirement of working as sustainably as possible has also been optimally fulfilled by the paperless workflow.”