NEW: Board named a Leader in the 2022 Gartner® Magic Quadrant™ for Financial Planning Software Read now

Planning efficiently across over 26,000 portfolios, projecting over 47 million analytical combinations

Carrying out a budget projection process of this magnitude has exponentially increased the number of numerical figures to be analyzed – (generated by multiplying the relevant metrics by the key business dimensions). We're talking about 47 million projections to date in around 26,400 business units. Without Board, this would have been simply unmanageable 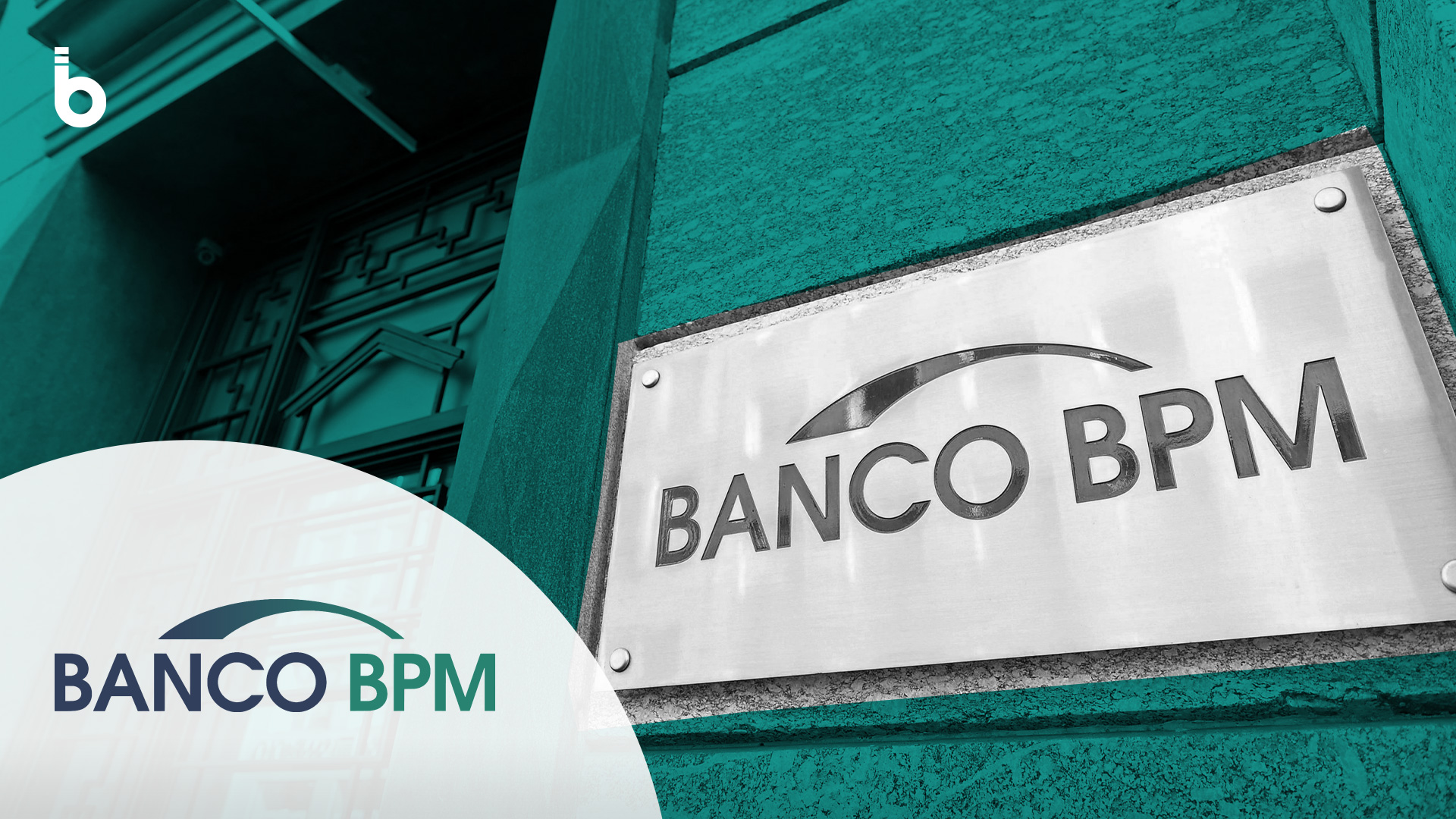 Following the merger between Banco Popolare and Banca Popolare di Milano, Banco BPM Group now serves 4 million customers through a wide-reaching distribution network within a multi-channel model. Thanks to its territorial coverage, with a strategic position in Northern Italy, the group is a national leader in several high value-added business sectors. It has a portfolio of renowned brands and product cross-selling opportunities. Creating sustainable value for shareholders and target areas through stable profitability and development is an integral part of Banco BPM's mission.

Banco BPM's structure (partly due to mergers and acquisitions) has become increasingly complex over the years, making a systemic approach to budgeting essential. Although the parent company mainly manages the sales network, a holistic approach is needed to create the budget and assign sales targets. An assessment is also required to review the impact on the group's companies and partnerships and their respective distribution agreements. All these elements need to be weighed up to direct the planning process with a group-wide focus. Cristiano Perillo Marcone, Head of Commercial Management Control at Banco BPM, explains:

"This systemic approach to the budgeting process – increasingly put into practice since Board was introduced to the organization - allows us to find the best way to allocate the budget to the group's business lines and support external partnerships. We can now efficiently determine which business shares to assign to our partners in the insurance, asset management, managed assets, consumer credit, and non-banking sectors." 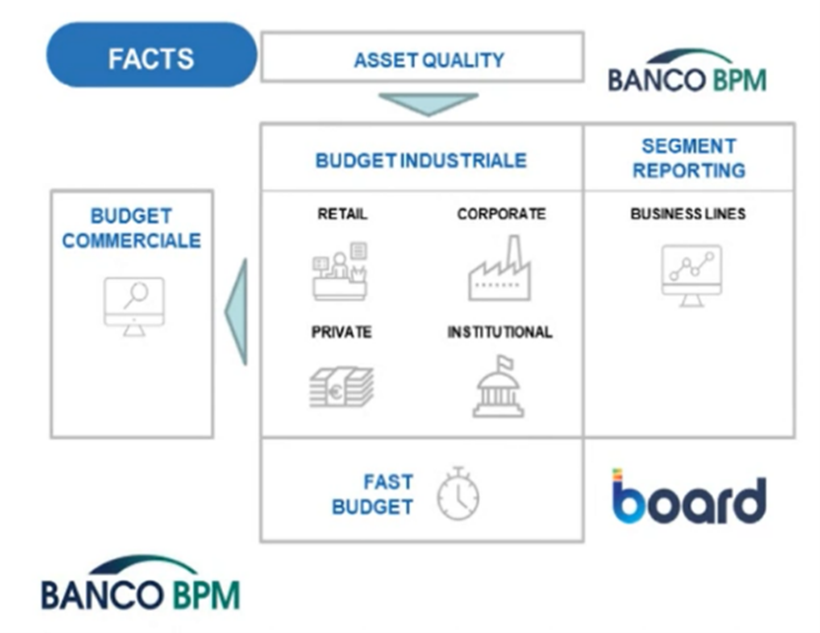 Overview of the Board project at Banco BPM

The first requirement was integration.

"We started by trying to cover all our planning and analysis needs with Excel spreadsheets. However, given the number of analytical metrics to be projected (around 20,000 at the time), and after multiplying the metrics to be measured by the number of key dimensions of the business, this proved to be inadequate".

Banco BPM decided to introduce a new planning and analysis solution, opting for the Board Intelligent Planning Platform. Having secured the quality and completeness of its data by migrating it from spreadsheets to the Board database, Banco BPM has exponentially increased the amount of projected analytical figures from 20,000 to as many as 47 million. This has occurred over eight years, mainly due to further mergers and acquisitions.

"Without Board's high-performing platform, in terms of technology and business logic, it would have been impossible to manage and analyze so many metrics effectively," explains Cristiano Perillo Marcone. "Board allows us to determine the budget targets to be assigned to the various group entities and explain why those specific objectives were set."

To this end, the financial cost allocation process has been digitalized with an ABC approach where the controller directly costs the BPM Group's organizational units and assigns them the services they use to establish their correct share of costs.

Banco BPM's budgeting process has been standardized and integrated with a multidimensional approach. This improvement has significantly reduced operational risk factors and aligned metrics with official reporting.

Furthermore, Banco BPM has transformed an approach primarily geared to using historical data to replicate business plans into a forward-looking process that considers current trends as well as medium to long-term market forecasts. Perillo Marcone notes a key turning point for the banking and financial services sector, which – with the help of the Board team – Banco BPM was able to navigate very smoothly.

"In 2013, the data history showed that interest rates were rising, so customers should have continued to come to us for more profitable bond deposits. However, with our improved ability to analyze key metrics and business dimensions from that year onwards, we found that the rate projection indicated a downward trend. Therefore, as interest rates fell, we were able to predict that customers would have stopped returning less expensive deposit instruments and moved over to ones that were more expensive for the bank and more profitable for the customer. Instead, we predicted the opposite (which came true in 2014-2015): an asset rotation with customers who, as interest rates declined, asked to repay their existing loan to take out a new one that was less expensive.  Board, therefore, allowed us to set up a different business scenario rather than simply replicating what we had done in the past."

Board's functions have also allowed BPM to make significant improvements to its corporate reporting. In particular, segment reporting is introduced to structure and engineer the monthly reporting process for the group's profit allocation. It was broken down by business line, structuring the appropriate institutional (IFRS8-compliant segment reporting) and management reporting.

"The main aim of segment reporting is to show the profitability of the various business areas," explains Perillo Marcone. Board's logical architecture, which combines planning, reporting, and analytics, has allowed us to build a structured data processing system that includes planning and accounting features in a user-friendly analysis environment. This is well-structured but flexible enough to respond to regulatory and organizational changes in reporting requirements quickly."

In addition to the commercial budget processing, analysis, and segment reporting projects, Banco BPM has also rolled out an application for advisory services. This uses the Board platform's simulation feature to create and manage various business scenarios to respond to supervisory bodies' requests specifically. The BPM Group needed to develop investment and divestment planning through a multi-scenario simulation model using the same parameters as those applied when assessing the adequacy of transactions. As Perillo Marcone explains:

"Consob requires us to integrate budgeting activities with detailed analyses for each client portfolio so that we can ensure consistency with the assessments of individual clients when setting the sales network's budget targets for investment services. Once again, it was vital to make the right decision by creating plans that align with the group's management decisions and demonstrate –both internally and to supervisory bodies – that solid figures back up the budget. Here too, the Board platform has proved indispensable, as we have found ourselves having to manage a vast number of key metrics and dimensions. These have grown from an initial 20,000 figures to 2 million, right up to the 47 million elementary objectives we manage today."

"We only used Excel for the initial stages of budgeting for large individual clients, but with Board, we can gather the Institutional Department objectives set on the spreadsheet and integrate them with the overall objectives of the sales network," explains Perillo Marcone.

Banco BPM's management has found Board to be a highly efficient tool, even for internal tasks, presentations, and discussions, where the main person involved, is a CEO or GM. Senior managers and executives were increasingly required to quickly process changes or guidelines required by the CEO or GM to analyze important or noteworthy simulations. Banco BPM, therefore, introduced an app called "Fast Budget."   Perillo Marcone recalls:

"When we examined budgeting or forecasting scenarios that don't assign objectives to the sales network, we had to meet with a CEO or GM for them to tell us what action to take or what changes to make. Then we needed to meet again a couple of days later for the updated projections. Before using Board, when we only had Excel spreadsheets, this would take us an average of two weeks!  With Board's 'Fast Budget,' we can quickly and easily create an aggregate or summarized list to sum up the budget. This can then be presented in an effective and immediately accessible way for senior figures such as General Managers or CEOs, without showing all of the details relevant to Sales Managers.  Now, with Board's 'Fast Budget,' it only takes two days to report figures to the CEO! Including the budget result and all key metrics to be analyzed with a suitable explanatory set of data.

As the group has grown, especially after the merger of Banco BPM with Banca Popolare di Milano, management has introduced a segmentation logic to make the various budgeting process cycles more effective. The various group entities differentiate these without losing sight of the overall picture.

"We've implemented a planning process that is consistent with the various business owners we deal with," Perillo Marcone adds. "When we talk to the head of the retail segment, for example, we discuss the retail budget. If this retail network is partly distributed over Banco BPM and partly over Banca Popolare di Milano, Board allows us to make assessments across a unified retail segment. The same applies to the corporate part and so on. Board has also made it much easier to process the various segments: the segments of the business budget network can match up with those opened in the segment reporting. One of the many benefits of this alignment is that it has improved our relations with supervisory bodies."

Board has also been used for general operational performance management at individual branch level based on an analytical model for monitoring the operational efficiency of local structures, which has ensured correct sizing of the distribution network.

As seen, the planning of the retail, corporate, private, and institutional segments has integrated with the reporting and application of fast budgets. Going even further, Banco BPM has used Board to create a Commercial Budget projection process that assigns targets to each business area, branch, and manager, involving thousands of Business Units:

"Carrying out a budget projection process of this magnitude has exponentially increased the number of figures to be analyzed – (generated by multiplying the relevant metrics by the key business dimensions). We're talking about 47 million projections to date in around 26,400 business units. Without Board, this would have been simply unmanageable," Perillo Marcone adds.

Given the now vast number of projections and business units involved in Banco BPM's commercial budgeting processes, the group has also decided to turn to Board for asset quality.

The next project will involve making projections of any potential deterioration in the loan portfolio, determining its impact on risk metrics, and integrating them with the Commercial Budgeting economic and capital projections. Thanks to the Board platform's integration features, these dynamics will be developed and combined with the sales network budget projections. "Again," Perillo Marcone concludes, "We expect to have easier relations with supervisory bodies, the sales network, and the credit sector. This is because Board arms us with the figures we need to demonstrate the overall consistency of the targets we assign to the sales network." Banca d'Alba chose Board to make a difference

"Analytics & Planning as a Platform" at Sella Group The Evolution of Constraint Based Planning at HSBC